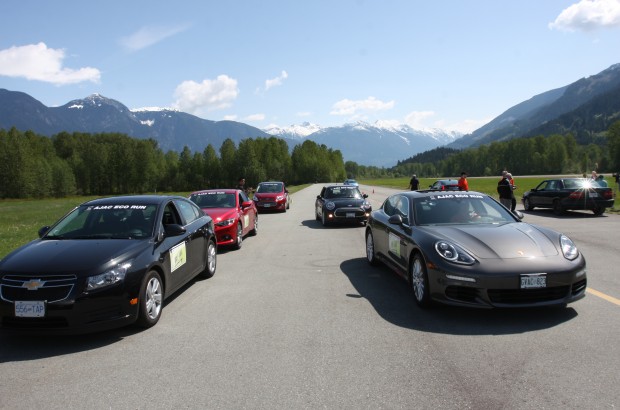 Style vs. Substance? In the car world, these two ideas are getting closer together every year. Some intrepid drivers race across Canada to prove it.

Earlier this year, I was invited to take part in the Automobile Journalists Association of Canada Eco-Run. While a girlfriend commented that the title sounded as exciting as waiting for nail polish to dry, the event itself was considerably more dynamic. Over three days, a group of journalists covered a specific route, taking turns driving a bunch of vehicles designed for optimal efficiency. The subtext is that the journalists were also being tested, because everything was measured and documented.

On the waterfront in Vancouver, British Columbia, our eighteen vehicles sat stickered and signed as if for a race. It was, in a way, as each of us was trying for maximum fuel economy while maintaining respectable travel times. Our steeds were a mix of pure electrics, hybrids, gasoline, and diesel, from Mitsubishi I-Miev to Porsche Panamera Hybrid. In the midst of the group, a Ram 1500 Diesel loomed above the other competitors. Volvo, Cadillac, Mercedes, Chevrolet, Nissan, Hyundai, Kia, Mazda, Lincoln, Ford, Honda, and Mini were all represented. There was an air of excitement as the start flag waved. We drove past the TV crews and cameras on our way to the Sea to Sky Highway.

The Sea to Sky Highway starts by following the Pacific coast, winding its way towards the town of Squamish. Squamish sits on an estuary, with the mountains as a backdrop. On that first stretch, I drove the Kia Optima Hybrid, and achieved 6.19 litres per 100 kilometres. Converted to US gallons, which are smaller than Imperial gallons, that is 39 mpg. Not bad for some city traffic and the twists and turns of the highway. The Kia was pleasant, and seamless in operation, nothing exotic except the extra gauges for battery charge and economy.

Lunch was at the Squamish Railway Museum, Wandering amongst the locomotives and carriages, it made me reflect on the relatively short history of the automobile. 100 years ago, our journey would have been made on foot, horse, or by rail. That would have been the exact year the railroad pushed north into Sea to Sky country.

From Squamish the road starts climbing towards my home town of Whistler, tucked away in the Coast Mountains. For this leg, I had the Nissan Leaf, a pure electric. One of our partners, FleetCarma, had come up with a formula to calculate equivalent fuel consumption when comparing electrics to conventional vehicles. Staying with the flow of traffic, I managed 107 mpg. The Leaf is very much a real car, quiet, comfortable, with decent performance. Where I live, it couldn’t be my primary vehicle, but for urban commuting, the low cost of operation would be hard to beat.

Day two of the Eco-Run took us north, to Pemberton Airport, the home of Sidorov Advanced Driver Training. Yes, my company, because for the first time the AJAC event would include a performance component. Helping me were Clare Samuel, former British Ladies Rally Champion, and retired Royal Canadian Mounted Police officer Murray Lunn.

My ride for setting the courses, and most of the day’s drives, was the Volvo S60 E-Drive. While the drivetrain is conventional, all sorts of sophisticated engineering gets the most out of each drop of gasoline. In full economy mode, it feels like there is a lot of electronic trickery going on, but no arguing with results. The S60 E-Drive is still very much a luxury sports sedan, yet got 49 mpg during my stint behind the wheel.

MPG up, stereotypes down

Not too long ago, anything built with economy in mind tended to be a penalty box. Low rolling resistance tires also had lower traction, the interiors were Spartan, and so on. A revelation at the airport was that every one of our fleet performed well, through slaloms, short race course, and emergency braking. By informal vote, my instructors also listed Canadian-Chinese journalist Regina Chan amongst the best drivers of the group. Two stereotypes downed at once.

Day three took us back towards Vancouver, and a series of media events. Our only stop en route was at the spectacular new Sea to Sky Gondola. I drove the Cadillac ELR, based on the Chevrolet Volt. However, enough work has gone into it that it feels solid, sporty, and luxurious, one of the better Cadillacs in terms of driving dynamics. That stretch yielded 47 mpg, and included some Vancouver traffic.

Other vehicles that impressed me were the Porsche Panamera Hybrid and the Ram 1500 Diesel. The hulking four-door Panamera still drives like a Porsche, and managed an average 42 mpg during our tour. The Ram’s Italian-built diesel is a great light truck engine. The suspension, drivetrain, and interior take my vote for best combination amongst half-ton pickups. It came in at 26 mpg.

There was more to the Eco-Run than just a display of vehicles. The techniques we used to maximize fuel efficiency work on any vehicle, regardless of age. Really, they are simply components of skilled driving. Look further ahead, a minimum of twelve seconds travel time. The average for most drivers is 3-5, not nearly enough lead time to plan for light changes, hills, and developing traffic patterns. Anticipation and planning are two key elements of eco-driving, along with smooth control inputs. Correct tire pressures make a big difference too.

Amongst other things, my company runs eco-driving clinics. Most students end up reducing consumption by 15 to 25 %. That is a genuinely big deal. Think about it, you could help pay for your next vacation simply by driving better.

More information about the Eco-Run, and all eighteen vehicles, is available on the AJAC website, www.ajac.ca