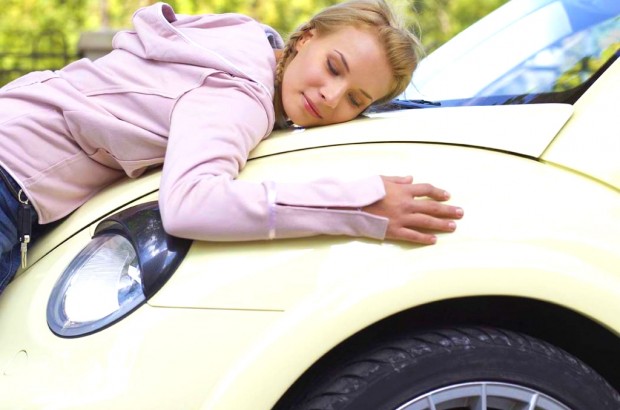 Congratulations! Buying your first car is one of life’s great experiences — but which one to get? Remember, cars are like shoes: It’s not a question of which one is best, but rather which one is best for what you need. Here are a few situations and suggestions from VroomGirls for your brand new baby.

You’re buying your first car and…

…You want to go green

The Prius is the best-known hybrid on the market, and with good reason: It makes it easy to get outstanding gas mileage (we’re talking 48 MPG or better). Using less fuel means our country imports less oil, and it also means cheaper fuel bills for you. Pretty nice for a first car.

Other cars to consider:
Volkswagen Passat TDI: A roomy diesel-powered sedan that gets 40+ MPG.
Chevrolet Volt: A versatile car that runs on battery power around town with a gas engine for long trips.

…You want to go electric

Battery-powered cars are quiet, clean, and easy to live with: Plug ’em in at night and you have the equivalent of a full tank in the morning. The 500e is cute, cuddly, and a lot of fun to drive, and it’s a stylish way to show the world that you’ve gone electric.

Other cars to consider:
Toyota RAV4 EV: Toyota’s family-sized electric SUV is a great way to set an example for your kids.
Tesla Model S: Big, lavish and luxurious, though it’s priced accordingly.

There’s nothing wrong with getting from Point A to Point B as quickly as possible. Not only does the BMW 3-series offer a choice of powerful engines, but it has the steering and handling to back up all that power — exactly what you’d expect from a German car.

Other cars to consider:
Mercedes CL45 AMG: This compact luxury sedan can scoot like nobody’s business!
Chevrolet Corvette: Big, brash, and boldly American, yet it can run with Porsches and Ferraris.

…You’re not a very good driver

Some of us just weren’t cut out to drive, so we need a car that will keep us safe. The Sonic protects its occupants with ten airbags, more than almost any other car on the market, plus it has the OnStar system, which automatically calls for help in the event of an accident — even if the driver can’t.

Other cars to consider:
Chevrolet Spark: The Sonic’s little sister, with 10 ‘bags and OnStar in a city-friendly size.
Volvo S60: A sporty sedan from the brand known for building some of the safest cars in the world.

…You want to buy American

Here’s a car that wears its American roots on its sleeve, right down to an image of the Detroit skyline inside one of the storage bins. Freshly redesigned for 2015, the Chrysler 200 is a beautiful car inside and out, with a quiet ride and a luxurious demeanor. And while many American-branded cars are actually assembled in Canada or Mexico, the new 200 is made in Michigan.

Other cars to consider:
Ford Focus: Small and sporty, the Focus was designed in Europe but is built in Detroit.
Buick Enclave: A luxurious and practical seven-seat SUV made in Lansing, Michigan.

…You want to get your kids to school in record time

The idea of a Porsche SUV may sound deliciously ridiculous, and that’s exactly why we love the Macan. With a choice of two engines (fast and insanely fast) and handling derived from its sports-car cousins, the Macan drives like a proper Porsche — and yet it’s also a roomy, family-friendly SUV.

…You want something stylish

Nowadays, style goes beyond beauty: One can also make a styling statement with what one chooses to drive, and that’s why we’ve picked the all-electric Tesla Model S, one of the most forward-thinking cars on the market. The Tesla is big and elegant, with plenty of room for your family and a choice of battery sizes so you can find the range best suited to your needs.

Other cars to consider:
Fiat 500: Italian style and city-friendly size with an affordable price tag.
Audi A7: A breathtakingly beautiful sedan that pays homage to 1960s European design.

…You want something sporty

The Jetta GLI is not only one of the most practical sporty cars on the market, it also may be the most frequently overlooked. The Jetta GLI has a powerful turbocharged engine and the excellent handling we expect from German cars, plus it’s roomy, comfortable, and affordable. An ideal cure for a boring commute.

…You want a big car

In the 1960s and 70s, the Impala (otherwise known as the Heavy Chevy) was the go-to big car for our parents and grandparents. Today’s Impala is slick and modern with a spacious back seat and big trunk — and unlike Chevys of yore, it’s reliable and rewarding to drive.

Other cars to consider:
Toyota Avalon: Lots of stretch-out space with legendary Toyota reliability.
Volkswagen Passat: Designed expressly for the American market with a limo-sized back seat.

…You have a big family

Another oft-overlooked vehicle, the Dodge Durango has the capabilities of a full-size SUV (including seven seats, lots of cargo space, and brawny towing capacity), but it’s similar in size to mid-size SUVs, making it easy to drive and easy to park.

Other cars to consider:
Honda Pilot: Honda’s smartly-designed eight-seat SUV gets great fuel economy given its size.
Chevrolet Suburban: The plus-size ‘Burb seats up to eight, plus it tows and hauls like a pickup truck.

…You’re single and loving it

This two-seat convertible is the ultimate reward: It’s fast, it’s sexy, and it’s lots of fun to drive, with just enough space for a weekend getaway with the boy-toy. Boxsters aren’t cheap, but you can build one to your budget; if you’ve got money to spend, the Porsche Individual program will let you customize the Boxster to your exact tastes.

Other cars to consider:
Jaguar F-Type: This British two-seater is fast and loud and offers a driving experience that will take your breath away.
Audi A3: A small sedan that delivers Audi luxury and road manners in a single-serving size.

…You have lots of stuff to carry

There are a lot of good SUVs on the market; we picked the Touareg because it’s the epitome of Vroom: Stylish, luxurious, fun to drive, and good at its job. We like the diesel-powered Touareg TDI, which goes nearly twice as far on a tank of gas as most SUVs.

Other cars to consider:
Toyota Highlander: Roomy, reliable, and utterly sensible, the Highlander is our go-to SUV.
GMC Yukon XL: Biggest of the big SUVs, the Yukon XL brings pickup-truck brawn to the SUV segment.

…You’re on a really tight budget

The Nissan Versa is the least-expensive car on the market, and yet it offers a roomy trunk, a family-friendly back seat, and even air conditioning as standard. Go ahead and pile on those extra-cost options — even the most lavishly-equipped Versa costs less than the average compact sedan.

Other cars to consider:
Honda Fit: A bit more expensive than other cheap cars, but incredibly versatile and built to last forever.
Mitsubishi Mirage: A low price tag plus a tiny three-cylinder engine that sips gas like a hybrid.

…You have lots of money to spend

We love most Audis because they are luxurious and fantastic to drive. The A7 is the most beautiful of the lot, with racy lines that make a VroomGirl’s heart go pitter-pat. It’s expensive, even by Audi standards, but if we had cash to burn, we’d fan the flames with this big, beautiful sports sedan.

Other cars to consider:
Lexus LS: Drive yourself in the LS460 Sport, or hire a chauffer and relax in the back of the extended-length LS 600h hybrid.
Maserati Quattroporte: This luxurious Italian sedan delivers passion and exclusivity in equal measures.

…You just won the lottery

Other cars to consider:
Rolls-Royce Wraith: The ultimate bespoke vehicle, this massive coupe can be trimmed to the buyer’s specifications.
Bentley Mulsanne: A big four-door sedan built with the finest materials — even the leather comes only from blemish-free cows.

Most people have heard of Maserati, but far fewer have seen one in person. The Ghibli is the newest vehicle from this elusive Italian automaker, and it’s fast, comfortable, and surprisingly affordable for an Italian exotic.

Other cars to consider:
Lotus Evora: One of the finest-handling sports cars on the market, built in Britain but powered by a reliable Toyota engine.
Aston-Martin V8 Vantage: Aston-Martin is James Bond’s car of choice; a drive in this beautiful coupe will make you feel like an international spy.

…You want to feel the wind in your hair

Not all convertibles let you bask in the sun; many cram the driver right under the windshield, spoiling the open-top feel. Not so the Beetle, which has a giant folding top that lets you and your friends bask in the sun. It’s also affordable, great fun to drive, and overflowing with character. We love it!

…You’re going to keep it forever

Forty years ago, Toyota established their reputation by building cars that seemed to be indestructible. The company has had its ups and downs, but they still build their cars like brick outhouses. The Camry is the most popular mid-size sedan on the market; we like it because it’s stylish, comfy, and built (like a brick outhouse) in Kentucky.

Other cars to consider:
Honda Civic: One of the most popular compact cars, in no small part because they seem to run forever.
Subaru Outback: Subaru’s intensely loyal owners frequently keep them for 150,000 miles or more.

…You live where it snows

VroomGirls.com First Car pick: Volvo XC60
It snows a lot in Sweden, so the folks at Volvo know a thing or two about making cars that go in the snow. Equipped with optional all-wheel-drive, this handsome SUV is exceptionally sure-footed — and should things go wrong, it’s packed with safety features.

Today, most SUVs are designed for a comfortable on-road ride at the expense of off-road ability. But the 4Runner has the bones of a truck, plus a sophisticated four-wheel-drive system that lets it crawl over rough terrain where even a good set of hiking boots would give you problems. An outstanding tool for those who venture off the beaten path.

Other cars to consider:
Jeep Wrangler: The great-great-great-grandcar of the World War II Jeep, the Wrangler is designed for trails first, roads second.
Toyota Tacoma: A bulletproof pickup truck that can keep going when the pavement stops.