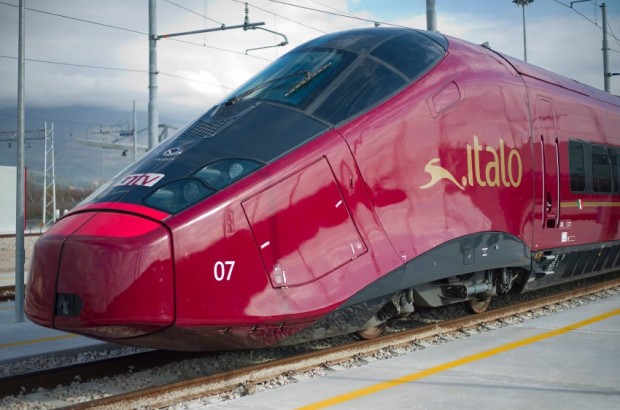 A Bullet Train Through Italy, Fast As A Ferrari

From the chairman of Ferrari comes a bullet train through Italy that is as posh as it is fast. Super luxe, super stylish and super quick, it’s this summer’s way to vacation through Italy!

Trained To Be Posh

Everyone knows that trains don’t run on time in Italy. And to at least one Italian man, they’re not luxe enough, or even fast enough. Ferrari Chairman Luca di Montezemolo, maker of some of the world’s fastest cars, has gotten into the game of bullet trains. His new company .italo, is a premium private high-speed train that runs daily from the north of Italy to the south.

.italo’s service (book through RailEurope.com for best prices) begins in the north from two locations, Turin and Venice, and terminates in Salerno, with stops along the way in Milan, Padova, Bologna, Florence, Rome, and Naples. It shoots along at speeds up to 186 mph, and doles out goodies like free Wi-Fi (though they are still getting the kinks out of a system that doesn’t communicate well with the iPhone), a quiet car (where cell phone and person-to-person conversations are prohibited), leather seating, and TV in some cabins.

A Seat For Every Budget

There are three classes of service: Smart (economy), prima (better), and club (which is a lot like the world’s best business-class airline compartments.) All classes are treated to wider seatbacks, wider armrests, and more elbow room than those found in Italy’s public rail system. All cars also have brighter interiors, thanks to 20 percent more glass surfaces in the trains, as well as electric sockets at each seat, more legroom, and individual reading lights.

The uber-luxe Club car has seating just for 19 people, including two private rooms, each with four seats and doors that close. Two dedicated attendants service these 19 fortunate passengers with complementary snacks and premium cocktails. Meals are extra. Prices range from $33/one way for a Smart-class ticket from Bologna to Rome, and $106 for the same ticket in the swankier Prima class. Club Car seating is sold through RailEurope.com.

Ferrari’s di Montezemolo says he dreamed up .italo to be the Ferrari of trains, and even the cars are painted a racy rich Burgundy red. He claims the cars are built to ride better than what’s out there: better at resisting side winds, with less vibration and noise at high speeds, better sound insulation, and even better at absorbing a crash, should that happen. It all sounds molto bene, but can di Montezemolo promise that HIS trains will run on time? Maybe not, but at least you’ll be comfy.