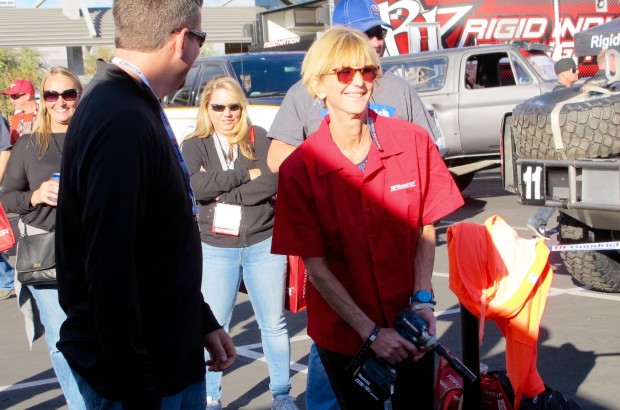 THE A, B AND C’S OF LOSING A LUGNUT

How Did I Get Here?!

It was my first Pit Crew Challenge and I was a big loser. I was teamed with Brad Lovell, one of six BFGoodrich brand ambassadors in the Baja Challenge, and we were in the parking lot at SEMA simulating what would happen in a real-life race. The task was to take off and put on a set of tires and perform a mock refuel of a racing buggy. Since I was with a pro, our official time was used as a benchmark for the rest of the competition. Let’s just say that another team did the job in less than 60 seconds. Our score was two minutes and 15 seconds.

That’s due to the fact that I am a klutz. During the tire change, I put the lug nuts on backwards and then they flew off and went under the car. And forget about refueling the gas… I couldn’t even lift the can!

Brad, the much-awarded off-road champion, was a real team player. As I apologized profusely he said, “Don’t worry, once during a desert race I was changing a tire and the lug nuts went everywhere and got lost in the sand.”

Why were we doing the challenge? BFGoodrich Tires has used motorsports as a proving ground for more than 40 years, and is involved in every type of racing, including sports car, desert, dirt, short course, and extreme rock crawling.

Surreal…Like Scuba Diving at Nigh

This year’s annual SEMA show — a yearly event for the automobile aftermarket and accessories business — was a few weeks away from the BAJA 1000, an event in which BFGoodrich is heavily invested.

My challenge-mate, Brad Lovell, champion off-road racer, has wanted to do this since he was a kid.

“I saw a trophy truck flying over a ridge and I thought, ‘that’s what I want to do!’ It’s been a life-long challenge coming up the ranks and we’re not there yet,” he said.

Almost a decade ago, Brad (an engineer at the time) and his brother, Roger, started rock crawling, and became enamored with the sport. Now they own the Lovell Racing team, and compete in the off-road arena. The brothers live less than a mile apart in Colorado Springs, Colorado, and they train by racing and working out in the gym.

I asked him about the upcoming Baja, which he has competed in numerous times. He said, “So much in Baja is raced at night. And there’s danger out there—dust, silt, people, traps, it’s surreal, it’s like scuba diving at night.”

Even before the company started racing in Baja 1000, BFGoodrich was testing out their tires in that region of Mexico. Peter Calhoun, Motorsports Marketing Manager at Michelin/BFGoodrich, noted, “BFG has been testing tires in the Baja peninsula since the mid 1970s, there is no tougher lab then going into the Baja.” Calhoun explained, “We are the leading field tire company, we have been racing since 1977, and we’ve won all four races in the Baja series.”

Although most of the tires they use are specific for motorsports, Calhoun said that the BFG engineers get a lot of research and development out of testing them in the harsh desert.

“Part of that test is to test out the environment and the design elements before they trickle down to consumer,” he noted.

The Baja 1000, had around 300 vehicles in the race, with about 66% of the vehicles equipped with BFG tires.

The race, which starts in Encinitas, 90 miles south of San Diego, is an 828-mile loop and runs for 24 hours.

“Racing in Mexico is a unique experience open-road race, there are no formal spectators but lots of people watch. It’s very much like a tailgating party. They love the spectacle of trucks flying through the air,” said Calhoun. However, there have been serious accidents due to spectators who alter the course.

The results of the Baja were in after I finished up this story. BFGoodrich Tires claimed 27th Overall SCORE Baja 1000 win, and placed in the top 11 overall finishers.

“Just a few years ago, some in the industry were ready to shovel dirt on the grave of BFGoodrich Tires when it came to desert racing. Instead, the finish-line crowd saw the parade of race vehicles on BFGoodrich Tires crossing the line with class championships. We painted the desert in title-winning performances,” said Chris Baker, motorsports director for BFGoodrich Tires.

“Four decades of success is a great story; but with this year’s results, we have written the opening chapter for many years of winning yet to come.”