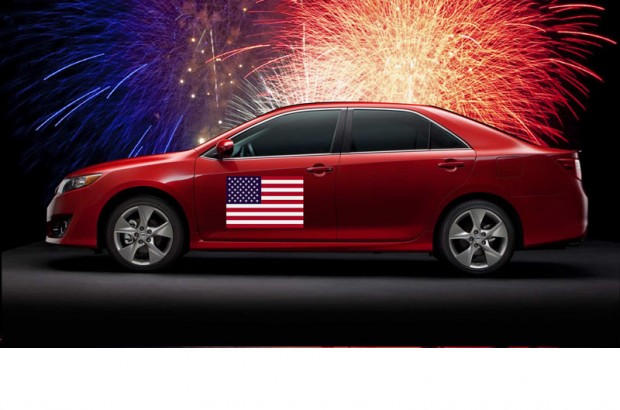 Happy 4th, everyone! And Happy 10 millionth to Toyota! Why? Toyota Camry, aka the best-selling car in America, reached its monumental 10 millionth sale.

So what is it about this particular car that resonates so well with American drivers? According to Bill Fay, Group Vice President and General Manager, Toyota Division, “The overall reputation of the Camry, which is 75 percent sourced in the U.S., gives our American consumer piece of mind. They are attached to the memories their Camrys have given them. From driving to their prom to bringing their babies home from the hospital. The Camry allows them to “Go Places.” We are giving them the consistency and reliability they want in a car. With options for a fuel-sipping 4-cylider, or more powerful 6-cylinder engine, or an even more gas-saving Hybrid makes the Toyota Camry appealing to a wide range of interests within the midsize category.”

Just how American is the Toyota Camry? Very–we’re talking flag-waving, baseball playing, stars-and-stripes playing American. Toyota may be of Japanese heritage, but today’s global economy is about so much more than a brand’s country of origin. (See our article about what makes an American car) Consider this: The Camry has been the best-selling car in the U.S. for eleven straight years. And those cars aren’t being shipped from a foreign country. Today, virtually every Camry sold in the U.S is made in an American factory, in either Princeton, Indiana or Georgetown, Kentucky. Conversely, many “American” cars– GMs, Chryslers and Fords–are built in Canada and Mexico. And it’s not just assembly. According to the National Highway Traffic Safety Administration, 75 percent of Camry’s content is sourced domestically, which means even more jobs stay in the U.S.A.

Creating memories, cranking out the miles

“The overall quality, dependability and safety that the Camry has always delivered can be attributed to keeping the car appealing to our consumers. We have presented these benefits to our consumers, who have largely embraced them. We have built loyalty with our consumers and help them to create memories while cranking out miles. As a result, they are experiencing long-term ownership of their Camrys. Those benefits will continue to be delivered for the next 30 years and beyond.” says Fay, describing the key to the Camry’s enduring appeal.

Speaking of memories–who remembers 1983? It was the year that brought us neon socks–which are in vogue again this summer. There were those Flashdance ripped sweatshirts, and New Wave bands on MTV. It was also the year that Toyota first introduced the Camry to Americans. While that Flock of Seagulls cassette has probably not lived to see its 30th year, 773 of those original 1983 Camrys are still in operation. (None of which–hopefully–are sporting those goofy aerobics headbands) That kind of longevity is one of the secrets of the car’s success. In fact, out of those 10 million cars, almost six and a half million of them are still being driven today.

So is the Camry going to sit back and rest on its 30-year-old laurels? No way! With an eye to the green eco future, a gas/electric hybrid Camry has been available since 2007. It has certainly been spurred on by its younger Toyota sibling, the Prius, which has just topped the three million mark in sales. This makes it the best-selling car in the green vehicle market, and the best-selling car in California for the last three years. Nothing like a little sibling rivalry to spur on some competition, so the Prius might want to watch out for the Camry hybrid in its rear view mirror…