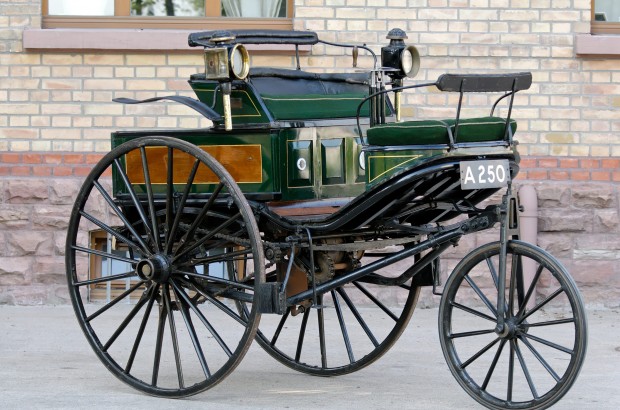 The very first road trip took place more than 125 years ago and yet the driver hardly rates a footnote in automotive history. And her journey, which proved for the first time that cars were a tool and not a toy, is virtually unknown.

Why? Did you catch the feminine pronoun? That’s right. It was a woman who came up with the idea, climbed behind the wheel, presumably told her kids to use the bathroom one more time even if they didn’t have to and made it a reality.

In 1888, Karl Benz patented his – the world’s first – motor car. Benz was a masterful technician and engineer, but what he wasn’t was a businessman or visionary. Luckily for Karl, his wife Bertha believed in him. Luckier still for Karl, Bertha had money which she used to back her husband. She knew that his Model III Patent Motorwagen was destined to make history. Which is why one day in the summer of 1888, Bertha woke early and left a note for her sleeping husband that she and their two sons were going to visit her family for a few days. The words “test drive” were not included in the note; if Karl inferred that since these trips from their home in Mannheim to her childhood home in Pforzheim were made by train, this one was too, he was mistaken.

Bertha led her boys Eugen and Richard to her husband’s factory and pushed the car down the road until it was far enough away to start without waking anyone. They were off.

Alas, since there were no roads and consequently no road signs this first car trip began in the wrong direction. When Bertha Benz realized her mistake, she corrected it by making the world’s first u-turn.

But did they sell diet coke and air fresheners?

Remember the part about Karl being a genius but not a visionary? He hadn’t even envisioned the need for a gas tank, although Bertha loses a few “visionary points” for not thinking about this before she left town. There were 1.1 gallons of fuel in the carburetor, period. Benz’s Model III ran on a petroleum ether called “Ligroin” (benzine) which was available at pharmacies. Bertha Benz found a pharmacist in the town of Wiesloch with an ample supply, thus anointing the world’s first gas station.

Even more vital than fueling the car was keeping the engine cool and to do that, Bertha needed plenty of water. In essence, Benz’s invention required water poured over it which as it evaporated would take the engine’s heat with it. Bertha and the boys were on constant lookout for streams, rivers and when all else failed, ditches.

They were also on the lookout for able-bodied pedestrians who could be talked into helping the boys push the car up any of the many hills on this rural route. The first time the car broke-down, Bertha saw it was a blocked fuel line which she unclogged with a few judicious pokes of her hat-pin. Then an exposed ignition wire needed insulating which Bertha fixed by wrapping one of her garters around it.

On the way back the braking system, a hand-lever at the side of the car wore out but ever-practical Bertha knew what to do: she found a cobbler and had him cover the brake shoe with leather, thereby inventing brake lining.

It is estimated that her 56-mile trip – New York City to Asbury Park, New Jersey – took 15 hours. Arriving in Pforzheim, she sent Karl a telegram presumably saying “Honey, I borrowed the car.”

Bertha and the boys made the return trip without incident. Her experience and recommendations lead Karl Benz to give his Model III an additional gear for hills and a more effective braking system. Further, her drive made it clear that testing new automobiles under arduous conditions was essential for all manufacturers.

By completing the first long-distance drive in automotive history, Bertha Benz showed her husband and countless skeptics that the car was here to stay. By proving it was fit and reliable, Bertha paved the way for Benz and Cie. to become the biggest automotive factory in the world.

She died in 1944 at the age of 95 and still today you can follow the Bertha Benz Memorial Route from Mannheim to Pforzheim. The next time you’re called a woman driver, take it as a compliment. It surely is.