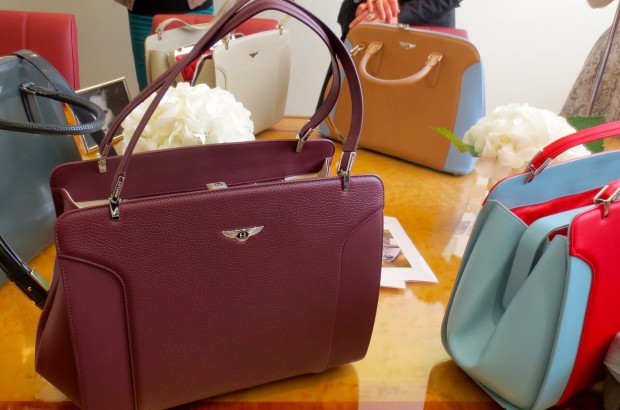 Luxury automaker Bentley, renown for its impeccably crafted interiors and supercar performance, has created its unique new Bentley handbags. You’ll want to park one in your closet.

The handbag game is tough. So many brands, so many fickle ladies. I know, I’m one of ’em.

But then I slipped my arm through the expertly stitched handle of the Bentley Barnato, one of two limited-edition models created this year, and I was a goner. The Bentley purse spews envy among all who pass by. The exterior’s rich, deep saturated color on the softest calfskin, and the precision detailing inside – double-stitched diamond quilted, of course – made of impossibly soft lambskin, and its understated and timeless styling, well, the Barnato says it all before you even say a word.

Now that Bentley has entered the upper echelons of handbag design – competing with the likes of Hermes, Gucci, Chanel and Bottega Veneta – it has to be beyond compare. The Barnato Bag is Bentley’s nod to Diana Barnato Walker, the socialite and accomplished aviatrix daughter of legendary race car driver and Bentley chairman, Woolf Barnato. The Bentley handbags start at $7,000 and have such a limited production, this year’s allocation just might be sold out before my post hits send.

Bentley is also releasing the Continental bag, named for the company’s most popular and iconic grand touring car that was first introduced in the 1950s. This handbag is larger and a bit more conservative in styling. Where Kate might carry the Barnato, it’s the Queen who would enter the palace wearing a Continental tucked into her elbow.

Each Bentley handbag is completely hand-crafted in Italy and is adorned with a small metal Bentley flying wing emblem – the same signature logo that’s on each Bentley car. A polished metal plate and limited edition number is set inside the bag. Like a man would buy a Patek Philippe watch and pass it along to his progeny, a woman can think of the Bentley bag as something important and valuable to hand down. Not because it is expensive, but because it is a thing of beauty and craftsmanship. It should only improve with time.

Handcrafting in a time of automation

As if we needed convincing that the Bentley handbags are conceived and executed with quality and timelessness in mind, the Bentley folks took a few of us journalists to see the Bentley car factory in Crewe, England. Stunning, shocking, and over the top, is how I describe the factory floor. There are Bentleys everywhere. In pieces, of course. And hundreds of artisans who are assembling the cars…by hand.

A sewing area has dozens of men and women who expertly stitch the seating and leather-wrapped steering wheels for the Bentleys, which are themselves being assembled a few feet away. The handiwork that goes into making Bentley’s sumptuous interiors among the most exquisite in the business, is the same level of quality that Bentley has demanded of its handbag artisans.

Most thrilling was the sheer number of cars being created. So many Bentleys – both left-hand drive and right-hand drive, depending on the car’s destination to places like the United States, where we drive on the right, or the UK, where they drive on the left. And in a raucous display of color. Bentley encourages its customers to select bespoke hues for their cars, and many drivers do just that. A CreamSicle orange shade was spied on the assembly line, and we were told that particular car was destined for the middle east. We gals were disappointed, thinking maybe Willy Wonka had snuck in an order for a glam car.

The Bentley Girls and their Bentley Handbags

Of course, it wasn’t enough for this group of journalists to experience the expertise and integrity that goes into each car at the factory, we had to see just how well the Bentleys perform on a racetrack. It was a twist, we were told, on the original Bentley Boys, who raced Bentleys in the company’s early days. If a Rolls Royce owner saw the world from the backseat of the car, a Bentley owner was a doer, the person who took control and made sure he (and now she) was in the driver’s seat.

So we donned fun retro racing overalls, embroidered with the moniker “Bentley Girls”, and hit the track. A team of marque’s professional drivers accompanied us, and pointed out how we could get the most speed out of the corners.

How does all of this pertain to a handbag, you wonder? It all became clear to me. It comes down to integrity. And the same virtues that motivate Bentley’s factory workers to build an incredible car – in both luxe appointments and road performance – are the same probities that are exhibited in these truly lovely Bentley handbags. How fortunate the lady is who owns one.

One Response to “The Charming Bentley Handbags”