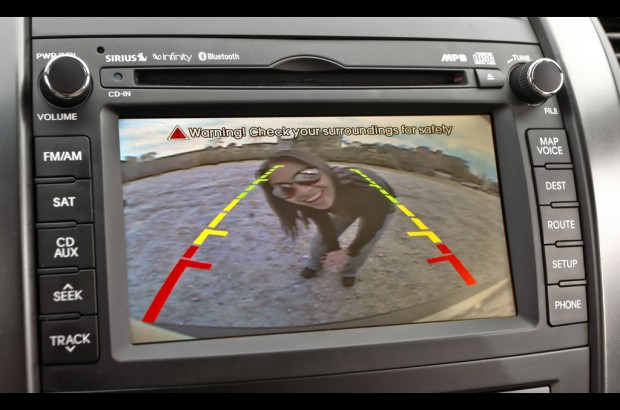 Backup Camera to be Mandatory for New Cars in 2018

Love that nifty backup camera in your car? A new law makes them mandatory for all new cars as of May 2018.

Sure, backup cameras are helpful for parallel parking and preventing the dreaded trash can bump in your fender, but are they so necessary that they need to be the law? NHTSA says yes–they are an invaluable safety feature, especially for preventing accidents involving small children.

According to the U.S. Department of Transportation, more than 200 people are killed and 17,000 injured every year in backover crashes when drivers back over objects in the blind spot behind them. Bigger cars and SUVs, the government says, mean bigger blind spots. Also, if you feel like you don’t see as much out of your rear view mirror as you used to, you’re not imagining things. As cars are designed to be more aerodynamic to get better gas mileage, back windows are often getting smaller, which can hamper your view.

Children under the age of five account for 44% of the fatalities in backover crashes. And in a tragically high percentage of those cases, the driver is a parent or family member, compounding the emotional trauma. Most parents teach their kids to stay out of the street, but many of these type of accidents occur in the driveway, where kids are likely to play. Countless pets, too, are victims of this type of accident.

Many automakers are already ahead of the curve. For example, the all-new 2015 Honda Fit offers the backup camera as a standard feature. And for Toyota, rearview cameras are nothing new.

“We are reviewing the final rule for rearview cameras issued by NHTSA. Rearview cameras have been available on Toyota and Lexus vehicles for many years. In fact, over 80 percent of Toyota, Lexus, and Scion models have rearview cameras as standard or optional equipment.” says Toyota rep Sona Lliffe_Moon.

But Toyota isn’t stopping with just the rearview camera. Future cars may also replace side view mirrors with cameras. No more clipping that side view mirror on another car, a post, or a mailbox…hooray! The NHTSA is being asked to allow automakers to remove side-view mirrors and replace them with cameras that may expand side vision while increasing fuel efficiency.

“Toyota has joined the industry in the petition to replace side view mirrors. In addition to safety, among other advantages, as much as a 3 percent gain in fuel economy can be anticipated.”

NHTSA expected the system would cost about $140 per new vehicle — and less for those that already have in-dash displays installed.