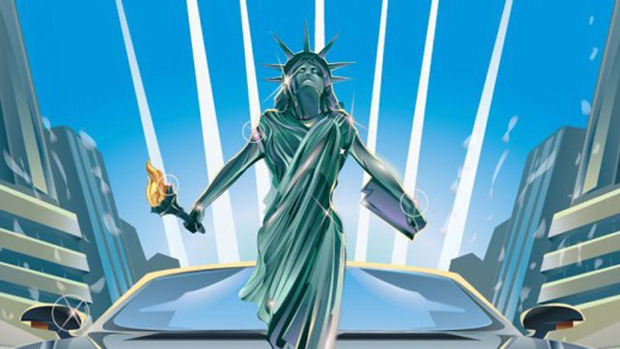 Back In the New York Auto Show Groove

If yesterday’s song was Jay-Z’s Empire State of Mind, today’s song is something with a little retro-funk–Ace Frehly’s (from KISS!) Back In The New York Groove. Make that the New York Auto Show groove! We’ve got groovy little truck-looking things, a car made out of blue jeans, and lots of new hybrid and electric models to keep it all interesting .

New York Auto Show, Day 2: The fashion world has Fashion Week. The auto world has the New York Auto Show. The bold, the beautiful, and the bizarre all make their big debuts this week as the world gets to see these shiny new beauties for the first time. VroomGirls is bringing you a sneak peek at the best of the lineup!

Remember when a small SUV was a contradiction in terms? And a fuel-efficent SUV was an oxymoron? Yeah, that was so late 90’s. The 2016 Toyota RAV4 Hybrid is the newest model to join the gas-electric entourage. When it comes to hybrids, Toyota is the brand to beat. They have outsold all other makes of hybrids for 15 years now, and have eight unique offerings of those environment-saving fuel sippers. And did we mention they look great? The New York Auto Show crowd was buzzing during its big reveal.

Just when you think a Volkswagen Beetle can’t get any cooler, it does. How? They make it out of jeans! Denim is always cool, whether you’re a peace and love hippie or a punk rocker with a mohawk. The 2015 Volkswagen Beetle Convertible Denim has a drop top made of denim, and seats could be mistaken for your old 501’s from high school. The outside? Stonewashed Blue Metallic, of course. Under the hood, though, it’s not so laid-back: it boasts a 170-horsepower 1.8-liter TSI® engine. So my mom was right–skin-tight jeans ARE for fast girls.

Do you have a fondness for flamingo lawn ornaments, Barbie, bubble gum, fairy princesses, Tab in a can, circus animal cookies, ballet shoes, or baby piglets? If yes, you will love the other new Volkswagen Beetle, Pink edition. It’s for the Paris Hilton, Nikki Minaj, or My Little Bronie in all of us.

When the 2016 Nissan Maxima made a cameo in Nissan’s Super Bowl commercial, people put down the chicken wings and took notice. No offense, but “sexy” has not usually been the first word that comes to mind when describing the Maxima. But apparently, Nissan has had enough of being the plain but nice car in the parking lot. They’ve had one heck of a makeover, and aren’t afraid to show off a little. Lots of curves and vroom on the outside, and rife with tech and gizmos on the inside. It looks way more expensive than it really is. Because being dependable and practical doesn’t mean you can’t rock some high heels and a push-up bra, right?

Want to keep a low profile and blend in to the crowd? Then by all means, stay away from the Kia Soul! They’re the cool hipster mobiles made famous by those hamster commercials. There’s a whole horde (did you know the correct name for a group of hamsters is a horde? It is.) of custom Kia Soul variants on display. These include the Tonka Truck-esque Soul’ster and the cute-but-with-a-mean-streak Kia Track’ster, which has 4 wheel drive and a souped-up engine. Both of these are concept cars at the moment, which means they won’t be available at your local dealership anytime soon. Bummer! But the ultra-mod looking 2015 Kia Soul EV is the real thing, and available right now. Which is good, because reducing your carbon footprint is way hipper than craft beer or ironic facial hair.

There are some things we Americans like, and we’re proud of it. When it comes to cars, the numbers don’t lie–we love SUVs. And we especially love crossovers–those bigger than a sedan, but smaller than a truck vehicles. We also love a car with the capability of going off-road, even if we never drive on anything rockier than a gravel driveway. Oh–and can it be an electric hybrid, too? So the Germans at Volkswagen have designed the Cross Coupé GTE to get our American attention–and it’s working. The car will go into production this fall, and will be made right here in–you guessed it–the good ol’ USA.