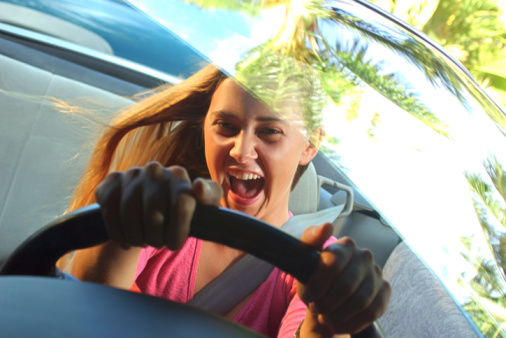 If you read car reviews here at VroomGirls — or anywhere else, though…shame on you — you’ll see references to handling. What exactly does that mean — and how important is it? We’ll handle handling in this edition of VroomGirls University.

Handling generally refers to how a car responds when it turns. A car with better handling can go around corners or turns at higher speeds and is less likely to lose control in a sudden panic swerve. How well a car handles is largely a function of the car’s suspension — the bits and pieces that attach the wheels to the car and allow them to move up and down — but the steering and tires as well as the vehicle’s weight also play major roles.

Do I need a vehicle that handles well?

Many people equate good handling with sports cars, but in fact, handling comes into play in emergencies. If you have to swerve to avoid an accident, your car’s handling comes into play.. A car that handles well will respond more crisply and predictably to your inputs (steering and braking). A car that does not handle well will be quicker to lose its grip on the pavement and either slide straight ahead or spin out.

Is there a trade-off for a good handling car?

Yes. The suspension setup not only determines a car’s handling characteristics, it also affects the ride comfort. Better handling requires a stiffer suspension, which makes for a harder (and often less comfortable) ride. Some manufacturers handle the ride-handling trade off better than others; for example, German automakers like Volkswagen and Audi are known for designing cars that handle well while maintaining a comfortable ride.

Why do cars handle better than SUVs and pickups?

Weight plays a major role in handling because of inertia. When you turn the steering wheel, the body of the vehicle wants to go straight ahead. The heavier the vehicle, the stronger the inertia, and the more the vehicle will resist turning. Because SUVs and pickups are larger and heavier than cars, they have greater inertia to overcome. SUVs also have higher centers of gravity, which makes them more prone to body lean; excessive lean makes the vehicles feel as if they are going to tip over. (Most vehicles won’t actually tip from simply taking a corner to fast; only in the movies do cars take corners on two wheels.) Crossover utility vehicles (CUVs) use car-like construction methods that cuts weight and lowers the center of gravity, giving them handling characteristics that are more car-like.

Can I change the way my car handles?

Absolutely! The easiest and simplest way to change your car’s handling is to change the tires. Fitting tires with better traction will improve your car’s grip on the pavement. For sports and performance cars, it is often possible to buy upgraded suspension components (springs, shock absorbers, sway bars) that improve the car’s handling, though ride quality will usually suffer.

Geeky stuff: What is handling balance?

Handling balance (or bias) refers to the car’s behavior when it reaches the edge of its handling envelope. If a car is taken around a corner at speeds beyond which it is capable, it will slide. Handling balance refers to which end of the car slides first. Most cars are set up for understeer — the front tires lose their grip first, and the car tries to go straight ahead. Some cars will oversteer — the back end of the car loses its grip and the car fishtails. Cars that lose traction at both the front and the rear at the same time are said to be neutral. Regardless of a vehicle’s handling balance, a skilled driver can take a car to its limits of handling and balance the car between understeer and oversteer.

2 Responses to “All About Handling”