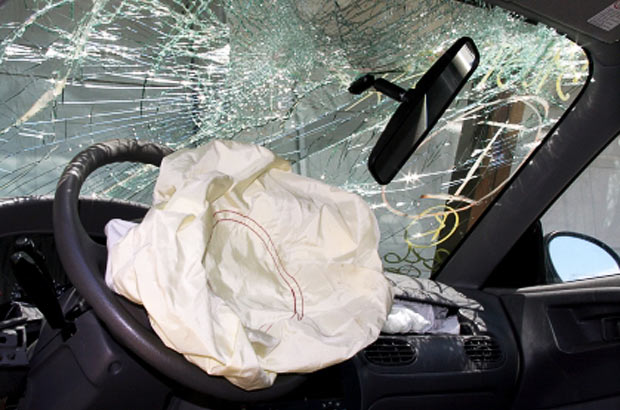 All new cars have airbags — four, six, sometimes ten or more. What exactly do all these different airbags do, and how do they work? Let’s find out.

– They prevent the occupants from hitting hard objects such as the steering wheel or dashboard.
– They spread the force of impact across the width of the body, rather than concentrating a large force in a small area.
– They ease deceleration forces on the body.

Seat belts are a vital part of the airbag system. They align the body to provide maximum protection from the airbag, plus they provide protection in crashes that are severe enough to cause injury, but not severe enough for airbag deployment.

Front airbags are mounted in the steering wheel and the dashboard, and are designed to help cushion the front-seat occupants in a front-end collision, where speeds and crash forces tend to be the highest.

Early front airbags were designed to protect heavy, unbelted occupants. This required large airbags that deployed with extreme force — enough to injure or kill smaller people, especially women and children. Airbags were “depowered” in 1998; today’s airbags use a variety of sensors to determine occupant weight, crash severity, and seat position and choose the most appropriate rate of inflation.

Knee airbags are mounted on the lower edge of the dashboard, and keep the occupants’ legs (which are not restrained by the seat belt or the front airbag) from striking the dash or, worse yet, the sharp bits underneath it.

Side airbags, also known as torso airbags, are mounted in the outer edge of the seat itself, and are designed to protect the torso in a side collision. (Protection is also provided by metal “anti-intrusion” beams built into the doors.) Most cars have side airbags in the front seats only, but some automakers offer rear seat-mounted airbags as well.

Inflatable seatbelts have a small airbag mounted in the seat belt shoulder strap; the airbag inflates to spread the load across the occupant’s chest. A relatively recent development, rear-seat inflatable seatbelts are only offered on a handful of cars.

Airbags are triggered by collision sensors and accelerometers that detect the direction and severity of a crash and determine whether the airbags need to be deployed, and if so, which ones. If an airbag is needed, a device called a gas generator starts a chemical reaction that produces large quantities of gas (usually nitrogen) to inflate the bag.

Airbags are not the big, fluffy pillows we see in slow-motion TV commercials. The entire deployment process, from collision detection to full inflation, must happen in about 1/25th of a second (about half the time it takes to blink), so airbags inflate with great force, usually accompanied by an almighty bang. Once inflated, the airbags will deflate right away, and may fill the car with smoke-like powder or dust.

If you are pregnant, it is important to wear your seat belt properly. The shoulder belt should lie between your breasts and to the side of your belly, while the lap belt sits underneath, across your pubic bone. Do not position the belt across your belly! Sit as far back as you can while still being able to reach the wheel with arms slightly bent. If your belly is still too close to the wheel, it’s best to let someone else drive.

Front airbags can be dangerous for children; kids should ride in the back seat until they can wear a three-point seat belt properly. If you must put your kid in the front passenger’s seat, slide it back as far as possible. Rear-facing child seats should never be used in a seat with a front airbag, as a deployment can cause lethal head and neck injuries.

Rear-seat side airbags are generally safe for child seats; check with your child seat’s manufacturer to make sure the seat is airbag-compatible. Kids (and adults) should avoid placing objects between themselves and the side airbags, or sleeping while leaning against the side airbag or the windows.