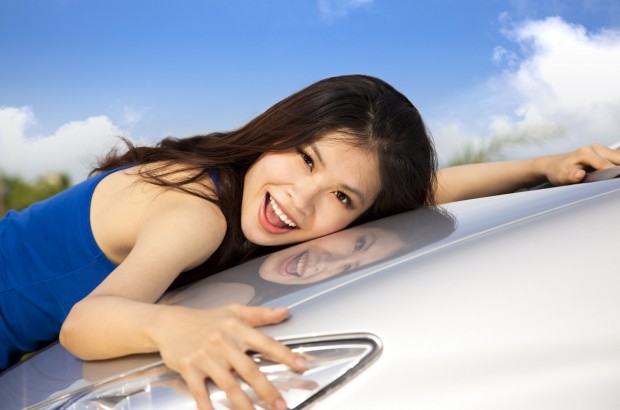 A Woman’s Guide To Attending an Auto Show: Yes, It Can Be Fun!

VroomGirls’ resident humor columnist, Janis Hirsch, walks around the massive LA Auto Show and actually has a good time. The Trick: leave the men at home and go with your girlfriends.

When I was a kid, every August, my mother would shove my sister and me into the Pontiac and schlep us to Lord & Taylor’s in Jenkingtown, PA for a day in hell, a/k/a back to school shopping.

Growing up with an older sister who weighed half what I did meant that the first part of the excursion was spent with me glumly watching while she, my mother and the saleslady tried to find something small enough to fit her that didn’t have footies.

When it was my turn, we’d head toward the Chubbette rack, so THAT was fun. This is when I realized that clothes-shopping is not a spectator sport.

I’m just back from the LA Auto Show and for the first time in my 15 years of going, I loved it. You wanna know why? Because I went alone. Which is how I should’ve gone to Lord & Taylor.

Under the delusion that it would make me a good mother or at least a less guilty one, I went with my husband and son to the LA Auto Show every single year. My son sat in every car. My husband looked under every hood. They still have lengthy and detailed discussions about a 1997 Mitsubishi engine they loved or the instrument panel on that 2001 Infiniti. Here’s my take-away from the past 15 years: there once was a turquoise Jeep that came with a shovel built into the outside panel. I don’t know why this enchanted me so but it did. The only way my husband could tear me away was to promise he’d buy me my “own damn shovel.” That’s it. A Jeep with an implement I’ve never used and never plan on using, oh and that you could cadge nice red tote bags at the Toyota booth.

When a family goes anywhere, no matter how non-traditional that family says it is, out in public the mom is the one who ends up carrying the coats, snacks, souvenirs and maps. We are shopping carts with vaginas. Alone at the Auto Show, all I carried was my purse. I felt positively naked.

Unencumbered by stuff and loved ones, I was free to wander. The first thing I thought was “Wow, if I were single, this would be a great place to meet men.” The second thing I thought was “there’s never going to be a ‘Guys of the LA Auto Show’ calendar” which is both unkind and dead-on accurate. Luckily, I’m not that shallow except when I saw Patrick “McDreamy” Dempsey with the Mazda people. Then I was that shallow.

I toddled over to my new crush, Hyundai and may I say, I would buy their exquisite Equus for the clock alone. Although there are a billion other reasons to buy it. I spoke to a very cool woman named Kim who’s a big cheese at Hyundai, and yes, that is her exact title. I probably should have asked her pertinent automotive questions but I don’t know any so we talked about our mothers, creepy car dealers and how the best part of any Auto Show is that there’s never a line at the Ladies Room.

Later, I witnessed the Auto Show equivalent of a Red Carpet event: the introduction of Hyundai’s new Azera. Seriously, there were bleachers full of photographers, fanboys pushing to get a closer look and reporters breathlessly counting down the minutes in German, Japanese, Korean, Italian and a language that sounded suspiciously like what Cousin Balki spoke in “Perfect Strangers.”

And then they drive this car out from behind a luminous curtain and it’s spinning tantalizingly slow on a giant turntable and there’s music and applause and giant video monitors flashing close-ups and I realize that I’m in a frenzy. For a car. I so never could’ve gotten away with that if I were with husband, son or pretty much anyone else with a shred of dignity or sanity.

Oh and a shout-out to that wonderful man from Bloomberg News who gave me his seat.

When I regained my composure I wandered over to the Coda section, mainly because I had never heard of Coda and secondarily because I thought maybe they’d be giving out some sort of getting-to-know-us swag. They weren’t. But the ladies there were still nice. And their cars are among the greenest in the world.

A word about who work at the Auto Show and by my unscientific count, they’re almost all women. At Coda, they were in exercise-ish pants, polo shirts and sneaks. At Mini Cooper, they were in faux-Apple Store attire: clean, simple, accessible and comfy. Scion too. As Vroom-guy extraordinaire Aaron Gold told me, “They rarely roll out Booth Bunnies during Press Days.” Meaning the women who greet visitors are Product Specialists; they work for the company and know everything about the cars on display but since they’re not working on commission, they’re cool if you want to be left alone.

One Response to “A Woman’s Guide To Attending an Auto Show: Yes, It Can Be Fun!”