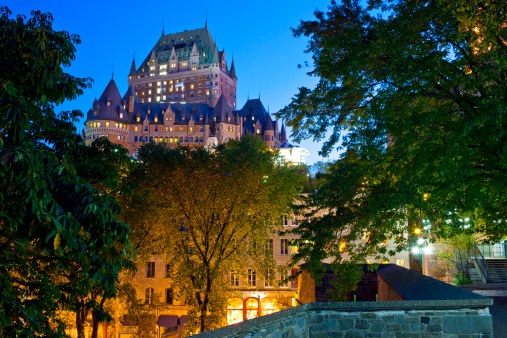 It’s my mom’s first vacation since my dad’s horrific accident more than six years ago. Since the accident, mom has catered to his every need, sticking closely to his side for fear of another setback. She perseveres – washing his clothes daily and preparing home-cooked meals. . But at 82, the weight of her world grows heavier by the day. Thankfully, after months of nagging her to take a break, she finally gives in to a 3-day vacation. A road trip to Quebec – but it’s not to go to the spa or the beach. This one is a spiritual journey – a visit to the Basilica of Sainte-Anne-de-Beaupré, a major Roman Catholic place of pilgrimage, about 20 miles northeast of Quebec City. It’s the only way she’ll come along for the ride. But first, we’ll have to scope out Quebec City for Vroomgirls who aren’t familiar with this unique Canadian province with European flair. Founded in 1608 by Samuel de Champlain, Quebec City is the heart of French civilization in North America. So if you’ve dreamed of going to France, but thought it was too far or too expensive, you’re in luck. Quebec City is the next best thing to a French getaway. And you don’t need to speak French. Most locals are bi-lingual so you can get by with English.

We hit the road in a 2012 Audi Q7 TDI SUV– a great family hauler with a quiet diesel engine loaded with technology, like a blind spot monitoring system. This comes in handy when exhaustion sets in during our 9-hour drive, east from Toronto along Canada’s busiest highway, the 401, to Quebec City. Luckily my sister tagged along for the ride, sharing the drive – a vacation we haven’t taken together with mom for nearly four decades. Sure we could skip the drive and fly direct to Quebec City – there are departures daily from Toronto across North America including Maine, Boston, New York, and Chicago. But as a car girl, I prefer to drive.

Quebec City is the only fortified city in North America, designated a United Nations World Heritage Site. It’s stunning, both inside and outside of the walls. There are plenty of places to stay – boutique hotels, B&Bs, and quaint inns. But I prefer to stay at the most photographed hotel in the world – Fairmont Le Château Frontenac. This stately luxury hotel is a landmark, standing above historic old Quebec with the majestic St. Lawrence River as a backdrop. The 119-year-old hotel with its castle-like architecture and turrets is the perfect place for mom to feel like a Queen. After all, it has welcomed stars and royalty alike, from Queen Elizabeth II and Princess Grace of Monaco to Theodore Roosevelt, Richard Nixon, and Ronald Reagan to Hollywood’s hottest celebs – Angelina Jolie, Leonardo DiCaprio, and Steven Spielberg. The food is amazing, too – some is grown on the rooftop garden alongside four beehives, each containing 70,000 bees, cultivated to make Fairmont’s own liquid gold – 650 pounds of honey annually. And if you’re brave enough in the winter you can stay at Hotel de Glace – it’s a life-size, magical Ice Hotel that does nothing to combat stereotypes that Canadians live in igloos.

Shop ‘til you drop – Charming stores cover nearly every corner of Quebec City. High-end designer fashions and home accessories are under one roof and three floors at Simons, Quebec’s flagship store in the heart of the old city. Venture off the beaten track to St. Joseph East Street, a chic fashion district for mom and babes. Benjo is an adorable kids store with a VIP entrance– a miniature door just for the little ones. Across the street, nestled in an unlikely spot – the ground floor of the church Eglise Saint-Roch, you’ll find exquisite clothes from local Quebec designers like Myco Anna – known for her stunning recycled clothing. Because of dwindling attendance, some of Quebec’s 89 churches have been converted into condos, restaurants, and book stores. But don’t worry, if you’re like my mom you can still visit Notre-Dame de Quebec Basilica, one of the first cathedrals in North America. Originally built in 1647, it was destroyed by fire twice, and rebuilt exactly like the original. And I admit, the Basilica of Sainte-Anne-de-Beaupré is a sight to see – the mosaic art is a masterpiece as is the exact replica of Michelangelo’s Pietà (the original is housed in Vatican City). You don’t have to be religious to appreciate the architectural beauty of these historic gems.

What to do for le fun

On the historic Plains of Abraham you’ll find big concerts all summer long. Madonna performs an outdoor concert this September. The battlegrounds have also hosted rock legends Aerosmith, Elton John, Paul McCartney, Roger Waters, Bon Jovi and Plácido Domingo during the Quebec City Summer Festival, held every July. Every August, the New France Festival is worth checking out if you want to be transported back in time. People dress in period costumes and revel in 17th and 18th century life in the heart of old Quebec. It’s an amazing sight to see.

Montmorency Falls is the highest waterfall in Quebec – it’s actually three feet higher than Niagara Falls! But unlike Niagara Falls, you don’t need to be daredevil Nik Wallenda with a tightrope to walk over them. Just take a cable car up the mountain and walk across a bridge for a spectacular view of the falls and the city below. The surrounding park area is also a great place to picnic, hike, bike, or jog.

A fun detour is to visit nearby Ile d’Orleans, 10 miles east of the old City. It’s a charming island with plenty to see including Cassis Monna & Filles, an 8-hectare blackcurrant farm, the first on the island, run by two sisters. You’ll find homemade blackcurrant jams, jellies, vinegars, wine and port – all made from the harvest, which incidentally takes 500 hours manually to pick one hectare. Then drop in at La Seigneurie, a 10-hectare lavender farm with 75,000 lavender plants all used to make an assortment of oils, moisturizers, hand cream, and body spray.

Sure you can dine on the finest French cuisine at Le Saint-Amour or The Continental – both serve up traditional meals such as pea soup, onion soup, meat pies, and maple syrup pie. But you can also eat at casual bistros like Le Petit Cochon Dingue, which means Crazy Pig in English, or fast food restaurants like Chez Ashton. Ashton serves the best poutine (aka – French fries dripping in curd cheese and brown gravy) in Quebec. That’s no small feat, since it’s the region’s culinary claim to fame. Wash it down with dessert crepes at Casse-Crêpe Breton or gelato at Tutto Gelato. Luckily, the city’s hilly landscape with an abundance of stairs and cobblestone streets is ideal for burning off those extra calories.

Quebec City is a fantastic destination for a road trip. And for my mom, it may have started out as a spiritual retreat but she gained so much more — revitalizing her mind, body, and soul. Mom promises to come along on another road trip, one day. I’ll just have to find another religious retreat to seal the deal.

One Response to “A Spectacular Road Trip Through Quebec City”