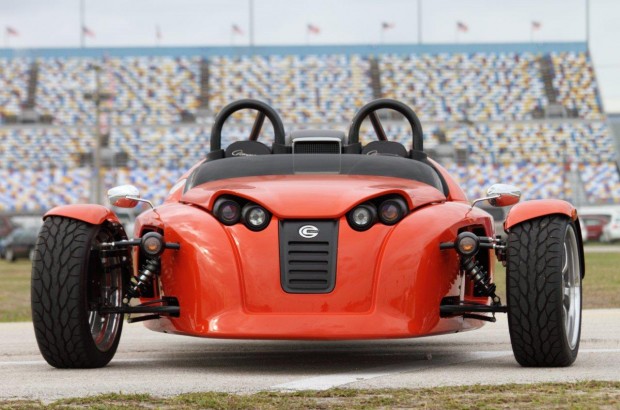 You’ve seen those funny looking three-wheeled motorbikes and wondered, who is riding that? Our Gal Petrina, that’s who!

I’m a runner not a rider. Truth be told – I hate anything with two wheels. Whether it’s a motorcycle, mountain bike, or even a stationary bike at the gym, I’ve avoided them like the plague for most of my adult life. Sure, a lack of coordination has something to do with it. So does the fact I volunteer in emergency at a trauma hospital in Toronto – one of the busiest in Canada. I’ve seen my share of motorcycle accidents and organ donors. But things changed when I spotted a motorcycle with three wheels – a trike. For the first time ever, I was intrigued by a bike. Add to the fact it was made in North America and it peaked my interest even more. Maybe it was time to finally ditch my fears and go for a spin. After all, three wheels are better than two.

A Trike Built For Two

Campagna Motors hand builds two types of motor trikes in Montreal, Quebec – the sporty, high-performance T-Rex and a roadster dubbed the V13R. Unlike most motor trikes, these have two wheels in front and one wheel in the back, which is known as a reverse trike. But what’s really unique is the side-by-side seating. Campagna is the only company in North America to offer side-by-side seating in a trike. It’s great because you can actually talk to the person beside you. You can’t do that on a traditional 2-wheeler when you’re straddled behind the driver, fighting the wind and screaming through a helmet. Plus, it’s more stable and secure than a two-wheeler.

Campagna has been working on their trikes for decades. The T-Rex was introduced as a concept back in 1988 and the first production version was built in 1995. But it wasn’t certified as a motorcycle by the US Department of Transportation until 2001.

Named after the famous dinosaur, the T-Rex is an attention grabber thanks to its radical styling. Women and men of all ages and races smile, wave, and gawk when I’m at the wheel. Even an East Indian woman in her fifties stops to say, “I would love to have that as my second car!”

OK, So It’s Not Very Ladylike! Who Cares?

Getting inside the T-Rex is a tricky feat and totally unflattering. First, remove the steering wheel by twisting it off. Then, grab the roof frame, sit on the side and lower both legs into the foot well slowly twisting and turning your body like Gumby into your seat. Inside, the cabin is tight. If you’re tall and heavy set it’ll be tough getting in and uncomfortable at the wheel. But for me, at 5’6 and 100-some-odd pounds, it’s suitable.

Driving the T-Rex is a cinch, even for a novice like me. I’ve never driven a motorcycle before. I’m nervous and intimidated – after all, this is a powerful ride. The T-Rex has a 1.4-litre 4-cylinder Kawasaki engine with nearly 200 horsepower – well, 197 ponies to be exact. Mated to the engine is a 6-speed sequential manual gear box. It’ll hit 0-60 m/h in only 3.9 seconds and has a maximum speed of 144 m/h!

I give it a go. One foot on the clutch, the other on the brake, I turn the ignition and hit a button to fire up the engine. It roars to life. Slowly I give it gas, releasing the clutch gingerly, and then speed away. The gear shifts are pronounced – especially in first and second. You sit low to the ground, just inches from the road like an F1 driver. Actually, it feels like you’re racing around in a go-cart. It’s fun and fast. Take a corner too quick and the rear end swings out fiercely. Braking requires muscle power – you have to nail the brake pedal hard to make it stop. A tiny wind blocker keeps you protected from the elements. If it rains, the seats are removable so you can dry them out afterwards. You can also add more padding inside of the seat cushions which improves the comfort level significantly.

Not Your Average Biker’s Hog

The V13R is Campagna’s latest creation. It was introduced last year as a cruising roadster. It has a Harley Davidson V-Twin engine, co-developed with Porsche, with 122 hp. Like a typical Harley, the engine is loud and unmistakeable – calling out to people in its path. On long drives, it gets annoying fast, but on quick jaunts it’s tolerable. The ride isn’t as forgiving as the T-Rex. And with no windshield you have little protection from the wind and flying stones. At high speeds, my locks blow everywhere. Inside, the cabin is more spacious – it’s wider with more shoulder room and a few small storage spots for your cell phone or wallet. And since it’s an open top, it’s easier to get inside the cabin. Remove the steering wheel, lift up the seat covers, swing over the side to stand on the seat (remember to ditch the high heels), and shimmy down into position.

Campagna’s hand-built trikes aren’t cheap. The T-Rex starts at $56,500; while the V13R is $51,499. There aren’t any bells and whistles, either – no power steering, no radio, no a/c or heating, no traction control, and no airbags. At least, there are seatbelts. Still, I understand the appeal – my first motorcycle ride was a blast driving around these North American-made wheels. Maybe one day I’ll try a 2-wheeler, but for now I’ll stick with three.