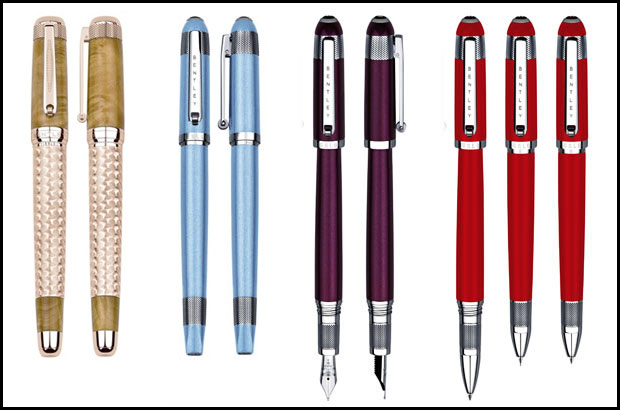 A Bentley Mulsanne Pen Fit for a Queen

It’s more than 500 times pricier than a Bic. If you can’t swing for the car, maybe the pen will do.

Ever find yourself digging around in the glove compartment for a pen? And at the end of your crazed search all you unearth is an old roller ball that’s missing the cap and dried up months ago?

Well, something tells me those who drive a Bentley and write with a pen from Italian luxury pen maker Tibaldi never have this dilemma.

Life would be far too elegant to simply throw these writing implements into the glove box and flip the cover closed. Actually, at $5,500, forget elegant, at this price it would be downright criminal.

To honor of the pen’s namesake motorcar — the Bentley Mulsanne (which starts in the $300,000 range for the 2012 base model!) — Tibaldi has fashioned writing instruments with knurled bands that echo the design of the Bentley switchgear and top them with the Bentley emblem, which recall the car’s starter button.

Like the British-made luxury auto, Tibaldi used only top of the line materials when creating the roller ball and fountain versions of the Mulsanne. Limited to only 90 of each variation, you can take your pick of sterling silver or 18K rose gold metal with one of three inlaid wood finishes — dark stained Vavona, Burr Oak and Burr Walnut. According to Giuseppe Aquila, the CEO of Tibaldi, “The greatest challenge when developing these extraordinary pens has been the production of the wood components, which were designed to match the interior of this outstanding new car.”

So if you’re in the market for a writing tool that is as much a piece of rare sculpture as it is a simple jotter, the Tibaldi for Bentley Mulsanne pen is for you. And though it starts around the $5,500, the price rapidly grows higher depending on the precious metals used.

And if you do find yourself in possession of one, the only way to treat such a pen is the way you would treat your 2012 Bentley Mulsanne — love it, use it, but be very circumspect when someone asks if they can borrow it!