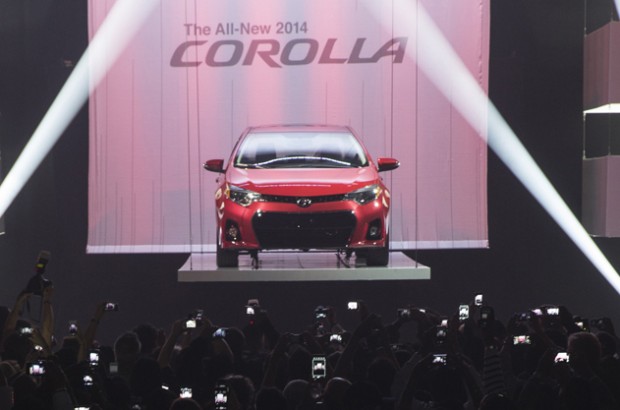 2014 Toyota Corolla Gets A Status Update

A quick word association game: Close your eyes, and say the first words that pop into your head when you hear the name Toyota Corolla. Compact? Cute? Economical? While those may have been the Corolla’s claim to fame in previous eras, the newly designed 2014 Corolla has gone for a serious status update. Here are some words that you probably did not think of: roomy, sleek, stylish, elegant. The 2014 Corolla lives up to its pretty namesake.*

Chances are good that anyone reading this has either driven, owned, or ridden in a Toyota Corolla in her lifetime. It is, after all, the best-selling car in the entire world. There have been almost 40 million Corollas sold all over the globe, and the nameplate has been going strong for 47 years. Looking at pictures of previous generations of the Corolla is a bit like looking through one’s own scrapbook. There’s the one that your next door neighbor had, then the sporty-looking one your brother got as a graduation present, and there’s the one you bought brand new when you got your first promotion. They are everywhere for good reason–Corollas are traditionally inexpensive to own, easy to maintain, and run forever. Their popularity is rooted in a product philosophy set forth by Tatsuo Hasegawa, the first Corolla’s chief engineer, who sought “to develop a car that brings happiness and well-being to people around the world.”

But enough about the past. Toyota’s challenge with the new Corolla was to engage today’s driver. So what did they do? Solicited exhaustive amounts of customer feedback, and came up with a all-new design that will entice both Corolla devotees and attract many new fans looking for some style.

Have you been working out?

Let’s start with the outside: compared to the previous model, this car looks like it has been to the gym–with a good trainer. It doesn’t necessarily look bigger or smaller, but it definitely has a sculpted, athletic look. There are nicely chiseled and sleek curves in all the right places. Although it’s still a smaller car, it looks long and lean, not squished and squashed. It has a beautiful grill in front, with low lamp headlights, which immediately give it the look of a more expensive car. The new sedan is almost 4 inches longer overall, but appears more compact due to its tapered shape. The darker wheels with their chic design definitely add to the overall drama, and the rear spoiler completes the look well.

So now we have a car whose outside looks bolster our confidence when pulling up to the valet stand. But as drivers, we spend a lot more time inside the car than looking at the outside. This is where the 2014 Corolla has really stepped up its game. First of all, it’s downright roomy. In the front seat, I was able to sit comfortably, stretch my legs all the way out, and even point my toes without hitting the front of the car! I’m no supermodel, but even at 5’7″ this is unheard of. And the back seat? That usually teensy-weensy crawl space for the unfortunate 3rd or 4th passenger? (there’s a reason you learn to call “Shotgun!” at an early age!) A six-foot-tall man sat behind me, and even though I had plenty of room in the front, his knees were not even touching the back of my seat. If you’ve been a passenger in compact cars before, you know what an amazing thing this is.

It took some design smarts to accomplish this. First of all, the wheel base is almost four inches longer than last year’s model, so that’s some more space off the bat. But the seats were designed with a denser foam to take up less space, which means more leg room for the back seat passengers. In addition, the exhaust system was re-routed to give passengers more floor and foot space as well. Another interesting feat of engineering is one most of us wish we could accomplish in real life: although the car had gotten longer and gained interior space, it has actually lost weight in order to increase fuel efficiency. (I need to get that trainer’s number.)

The touchable aspects of the interior have had some work done, as well. The design of the front seat is different, and feels immediately roomier. It’s called a horizontally-oriented dash, but what means is that passengers have more room between their bodies and the dash. All the interior surfaces are pleasant to the touch–nothing hard or plastic-y about it. Visually, it has some nice accents, such as contrast stitching on the seats, which make them look more like a nice handbag than a stiff vinyl knock-off. There are a lot of glossy black surfaces and metallic accents, as well as that blue ambient lighting that everyone loves.

While there will be four different grades when the car comes out in the fall — the L,LE,S, and the new LE Eco grade–the 2014 Corolla has some very desirable features that come standard at any level. These include LED lowbeam headlamps and running lights, an in-glass AM/FM antenna, color-keyed outside door handles, color-keyed outside mirrors, a fold-down rear seat, power door locks, power windows one-touch up/down, air conditioning with pollen filter, eight airbags, and–wait for it!!–standard Bluetooth connectivity. Pretty nice bling for a base level car!

Front to back, inside and out, Corolla has had a pretty amazing makeover. She’s overhauled the outside, while still maintaining the same accessibility that has helped her maintain her “Miss Popularity” title for almost 50 years.

*Do you know what the word “corolla” means? It’s the circle of crowning petals of a flower. Who knew?

One Response to “2014 Toyota Corolla Gets A Status Update”