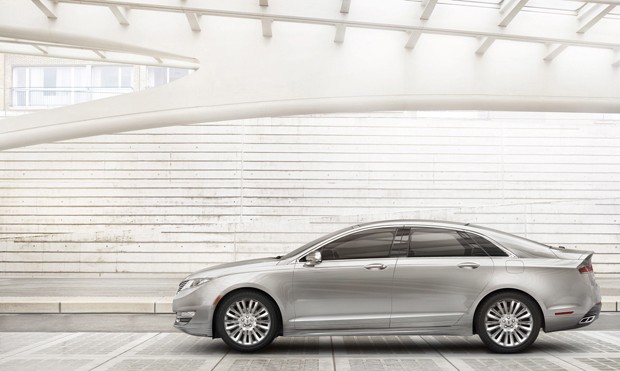 The Lincoln brand – you know, the one you take to the airport if your company is popping for the fare. Or the one parked in your grandpa’s post-war era garage. Yeah, that one….well, hasta manana. In 2013 Lincoln goes modern!

Who could imagine Lincoln would attempt to compete with car brands like Lexus and BMW? Or that it would go after fashionistas, early adopters, and tech lovers? But that is indeed what’s happening at the storied American brand. With the introduction of the 2013 Lincoln MKZ, a four-door, five seat sedan, Lincoln debuts the company’s new direction, which includes quick performance (yes, really), contemporary design both inside and out (honestly), and up-to-date telematics (that’s jargon for wireless technology.) Grandpa, wake up. Your Lincoln has gone the way of, well, record albums, floppy disks, and incandescent light bulbs.

The 2013 Lincoln MKZ hybrid gets a phenomenal 45 mpg in both city and highway driving. What’s more, it costs the same as the MKZ gasoline version, something no other car maker has offered as a pricing tactic. There’s an optional panoramic sunroof that extends over the backseat area, and it actually retracts completely, so that rear-seat passengers can feel a breeze just like their front-seat travelers. And each of the MKZ’s four trim levels gets a big 8″ color display screen, a feature that’s as functional as it is attractive. The 2013 Lincoln MKZ gasoline and hybrid versions goes on sale this month for $35,925, plus $875 destination and delivery charge.