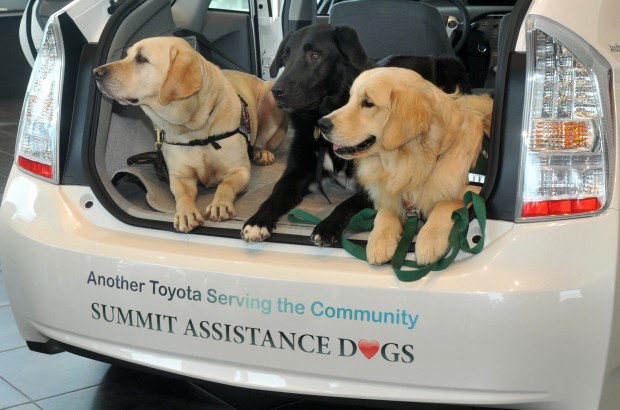 Sometimes the only thing holding back a non-profit from being successful is a good set of wheels.

Imagine you are a small, grassroots charity, working hard to make a difference in your community. The work is rewarding, but always tough. All charities need money and volunteers, but there’s one key element that can make an enormous difference in moving around all those meals, kids, rescued pets, volunteers, and donated goods–a great car.

This realization, says Michael Rouse, Vice President of Diversity, Philanthropy and Community Affairs for Toyota Motor Sales USA, led to the creation of Toyota’s 100 Cars for Good, a program that awards cars to non-profits chosen by Facebook voting.

“We looked at what was going on in social media with non-profits and realized that, while we didn’t have a dollar budget to contribute, we do have cars and trucks. This program puts our products as the star of the show to help keep non-profits going.” says Rouse.

But with so many worthy organizations out there, how would Toyota choose which would be rewarded with a new car? Toyota enlisted the public’s help with this Herculean task. And where does most of the public hang out these days? Facebook, of course! In addition to finding long-lost high school sweethearts or posting funny cat pictures, Facebook users can now help Toyota give these charities a helping hand. In another win/win, Toyota helped all the finalists to hone their digital marketing and social media skills in order to get the much-needed exposure and the requisite Facebook votes. Toyota provides each finalist with a toolkit that includes a digital video camera, training materials and free online advertising credits. Add in a funny new theme song and viral video, and the competition was on.

FUR AND FEATHERS WILL BE CRUISING

The organizations needed to persuade legions of Facebook users to click the “like” button on their behalf. Out of the first 50 winners, over half were organizations devoted to helping animals–and their people. They range from pet rescue organizations, such as Recycled Doggies, to Pelican Harbor, an organization dedicated to the rescue, rehabilitation and release of injured wildlife in Miami’s Biscayne Bay. Canine Partners for Life trains service and companion dogs to assist people with disabilities, and Operation Baghdad Pups helps reunite returning U.S. military solders with the brave dogs who served with them in the Middle East. A list of the first fifty winners can be found here. These are some truly compelling stories, so have a tissue handy as you read them!

TOYOTA TO THE RESCUE

One noteworthy organization, 1st Priotiry Search and Rescue, is based in the small Texas town of Plantersville, just outside of Houston. Rural areas are becoming more and more affected by problems such as gang violence, runaway teens, and even human trafficking. Founder Angel Seguin Garcia works with local law enforcement and volunteers to help family members search for missing loved ones. According to Garcia, young teen runaways–girls especially–are usually approached within 48 hours by a predator of some kind. Having transportation to search for and find runaways quickly is essential. Before now, the charity had to wait for volunteers to donate time and the use of their vehicle. With the organization’s new Toyota, Garica plans to set up a “mobile command center” to be available 24 hours a day, devoted to “finding that person and bringing them home.”

Another great charity who will soon be more mobile, thanks to Toyota, is The Dream Center in Los Angeles, CA. It offers residential rehabilitation programs for teens, a shelter for victims of human trafficking, a transitional shelter for homeless families, and mobile hunger relief and medical programs.

According to Dream Center’s Danny Slavins, the new Toyota will be used specifically in a special program called “Project Prevention”. It is foster care intervention outreach that works with the Los Angeles Department of Children and Family Services to keep families intact by delivering the required furnishings, clothing and food. Often, children are displaced because of a family’s financial issues. Its new Toyota truck will be used to deliver beds, refrigerators, and other items to keep a family’s residence suitable for children, which will in turn keep those kids out of the foster system. Slavins says the arrival of these items is met with a great deal of enthusiasm, resembling an episode of Extreme Makeover: Home Edition, with crowds exclaiming the show’s slogan, “Move that bus!”

In addition to winning the car, Slavins said that the voting competition inspired the entire organization. It is an avid user of social media, and charity workers had friends and followers tweeting, retweeting and re-facebooking all over the world to help in the effort to win one of the 100 Cars in 100 days.

GETTING IN ON THE ACTION

The good news is, the giving is not over. There are 50 more organizations that will be awarded a new car this year! There’s still time to get in your vote. The finalists have been decided, and five non-profit organizations per day will continue to be profiled on the 100 Cars for Good Facebook page each day through August 21st. At the end of each day, the winner gets a new vehicle and the four runners-up receive a $1,000 cash grant from Toyota. The program, now in its second year, has already awarded 150 Toyota vehicles.

“In year one, when we announced that we were giving away 100 cars, perhaps people didn’t realize it was the real deal. Now everybody knows that it’s a legitimate program,” explains Rouse.

The voting is ongoing until August 21st. Visit the Toyota 100 Cars for Good Facebook page and start clicking now!