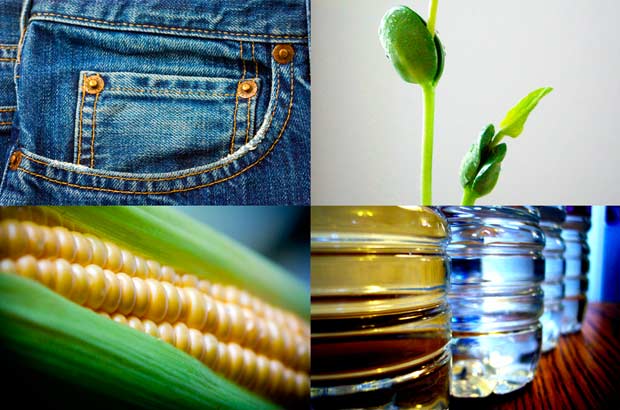 10 Weird Things in Your Car

Today’s vehicles are full of surprises. Those blue jeans you’re wearing could soon be soundproofing in your next car.

Pop quiz: You have empty water bottles, some old cardboard, a few rags, a banana peel or two and some (gulp) waste material in your car — do you head straight to the car wash or straight to the head of the eco-class?

For instance, don’t think of those dandelions dotting your yard as a blight, think of them as a cash crop. That’s right, Ford teamed up with Ohio State University to explore the possibility that those pesky weeds could be a natural alternative to synthetic rubber, the substance used to make your car’s cup holders, floor mats and interior trim. So the next time your neighbor with the tiny thighs makes a snide comment about your less-than-perfect lawn, tell her that grass is passé; real housewives raise weeds.

Ford is also looking into how to utilize natural fibers, including coconut and hemp, the latter of which even Henry Ford was said to have experimented with back in the days of the Model T. Grass, weed, hemp… hmmm.

Last year, Chrysler designed six eco-style editions of its 300 sedan, which had cork materials, bamboo, and recycled ultra-suede seat inserts within the interior. The cars were used by celebrities such as Tom Hanks and Meryl Streep to get to and from the Golden Globes, then were donated to charity.

Toyota has used material derived from kenaf (a relative of both okra AND cotton — and you thought your in-laws were mismatched) and ramie plants (a vegetable fiber used in mummy cloths, and nothing says “durable” like mummy cloths) for roofs in a couple of concept vehicles.

Even the abaca banana is getting in the act. Not your mother’s banana, the abaca grows in humidity (like the volume of my hair) and is already being used in everything from rugs to playground equipment. In cars, these banana fibers are used to protect the undercarriage of your car from anything the road flings up at it with the added benefit of driving something that’s irresistible to monkeys.

About 15 years ago, GM started processing solvents from recycled rags to prep vehicles for adhering emblems then began exploring possible ways to integrate those rags into car parts.

Mazda is now the first automaker to recycle scrapped bumpers from what are called end-of-life vehicles into a material for making new vehicle bumpers. How much do you love that sputtering old junkers are now “end-of-life” vehicles? Wait. Unless Mazda’s experimenting with hearses. Nah. Niche market.

These kinds of advancements in recycling technologies had us wondering what other kind of oddball things might be lurking in the vehicles we drive today. Nissan has developed a way to use discarded plastic bottle caps (specifically the fibers) as sound-insulation layers in areas such as the dashboard. The automaker is also looking to recycle the caps for making actual auto parts. But it’s Nissan’s electric Leaf that’s really the noteworthy model. Entire plastic water bottles were ground up in order to make the Leaf’s seats. Not that this is surprising: 99% of this vehicle is actually recyclable. Meanwhile, Ford has used recycled water bottles for seating clips. Pretty cool, huh? Finally, something good from the 2010 Gulf of Mexico oil spill: The air-deflecting baffles around the Chevy Volt radiator are made from recycled oil-soaked absorbent booms (some from the 2010 Gulf of Mexico oil spill.) In fact, the deflectors are 25% plastic boom, 25% recycled tires from a GM vehicle testing location, and 25% packaging plastic from one of GM’s U.S. assembly plants. The remaining 25% is polymers and post-consumer recycled plastics. For years, Honda was looking to switch from petroleum-based resins and other synthetic fibers to something plant-based and corn was the answer. They called their Honda-baby Bio-Fabric, although if you’re a chemistry geek you’ll enjoy knowing the Bio-Fabric polyester material is called polytrimethylene terephthalate. For non-geeks, enjoy knowing it’s a process involving fermented corn (no, it can’t turn into whiskey… or can it?). The texture makes it a usable source for the door linings, console tray, armrests, and seat coverings. It can be found inside the FCX Clarity.

How on earth did the good folks who make the Hyundai Accent and Elantra figure out that volcanic rock would be good in the manufacturing of auto interiors? Was it the same way that someone looked at what fell out of a chicken and thought “yum”? Anyway, I’m glad they did (the egg people, too) because the cloth-looking A and B pillars (the supports on either side of the windshield and where your doors meet the latch) are actually a plastic (nearly 99%) mixed with fibrous tissue (about 1%) and volcanic rock (about .5%). Hyundai chose this trio because it makes for a material that’s super easy to clean and scratch-resistant. Plus, this was an appearance choice, as Hyundai wanted to avoid anything it believed resembled cheap or hard plastic, but rather having an upscale look. See, that was the problem with my $25 knock-off Chanel bag — no volcanic rock! That’s right, soy isn’t just for dripping on your blouse at a sushi restaurant anymore. The Kia Rio (say that fast five times) is using soy to make their seating foam. The foam is a biodegradable soy-based material. Although the 2008 Ford Mustang has bragging rights as one of the first to feature soy-based foam in the seats. And just for the record, the Chevy Volt has them, too. Ford actually uses soy-based foam in about 20 of its vehicles.